Introduction to the science of heredity

Gregor Mendel, an Austrian monk, discovered in the mid-19th century how genetics and the science of heredity functions, which laid the groundwork for today’s modern theory of heredity. Among other things, he crossbred yellow and green sweet-pea flowers, and by analysing the new plants he worked out which colours were dominant and which were recessive. Mendel is known as the father of genetics.

The cell is the base for all living organisms. For a dog to actually become a dog billions of cells are needed. Every cell has different functions depending on where in the body it is located. All cells originate from the fertilised egg with its nucleus which holds a DNA spiral, the chemical that holds the genetic material for each individual.

The DNA spiral is divided into parts, and each part is called a chromosome. A dog has 78 chromosomes. The chromosomes come in pairs and each dog always has two sets of one chromosome. One set from the mother and one from the father.

Next is the gene which is a delimited part of the DNA molecule. Every chromosome holds many genes. However, a specific gene is always found in the same place on the same chromosome pair in all individuals of the same species.

Basically, the gene is the foundation for the hereditary system. The genetic code gives information to the cells on how a certain protein is to be synthesized. Every gene contains a description for a specific trait and the specific location for any one gene on the chromosome pair is called its locus.

A certain locus may occur in different forms synthesized by the same protein, and because of this, it generates different varieties of the same trait, e.g. brown or blue eye colour. Every such gene variation is called allele. Every individual always has two alleles for every gene, one from the mother and one from the father.
Homozygote and heterozygote

For a recessive gene to show the gene must be inherited from both parents. A recessive gene may be masked for generations until it is combined with a gene of the same kind and the trait will show up in the offspring. An individual with a heterozygote gene can carry both recessive and dominant alleles. However, it is always the dominant allele that shows in the individual.

Letters are used to describe heredity for colour and each colour sequence has its own letter. Dominant alleles are coded with uppercase letters and recessive alleles are coded with lower case letters.
Genotype and phenotype
When we look at a dog, we see its phenotype. It is the visible or measurable traits in the individual, e.g. its colour. While the entire set of loci and alleles in the individual is called its genotype, i.e. the individual’s genetic code, individuals with the same visible traits, i.e. the same phenotype, may have different genotypes.

When it is possible to see the individual’s phenotype, but can not determine its genotype, you say e.g. the dog is a B/_. This means that the individual is phenotypically black, but you do not know whether it is homozygote or heterozygote for the colour black. 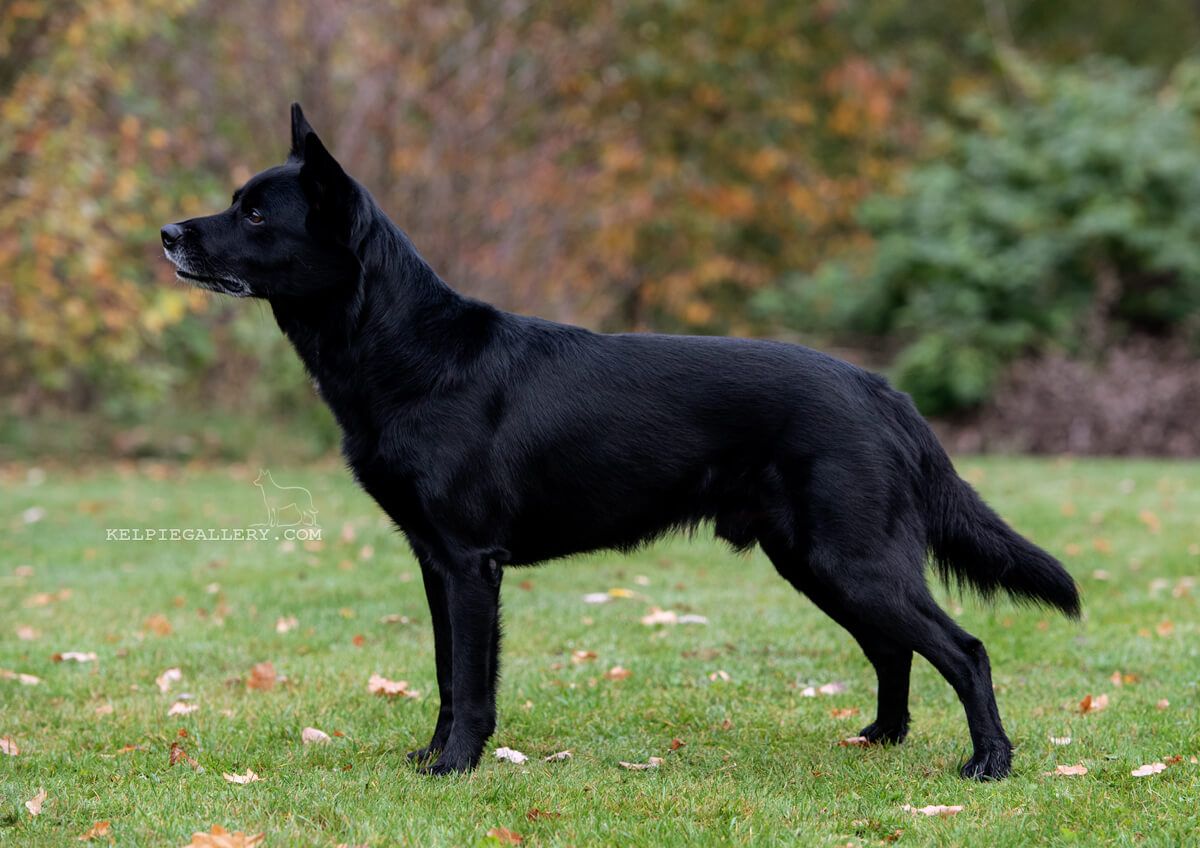 Black kelpie male
Many colours but only two pigments

Despite all the varieties of colours and patterns visible on dogs, there are only two pigments – eumelanin (black) and pheomelanin (red). All coat colours are made up of these two pigments, two forms of melanin. Each of the pigments has a basic colour which may be modified by different genes.

Eumelanin is the basic type for black pigment. Eumelanin producing cells cause black areas on a dog. However, there are genes making eumelanin to other colours such as brown, blue or isabella (a moderate yellowish brown). If a dog has any of the genes that makes the black pigment change to brown, blue or isabella, the entire black coat will change. The reason is that these genes inhibit or change the production of eumelanin so that none of the cells may produce a fully black pigment. Dogs with the diluted colour are called blue or isabella. Technically the brown colour is not diluted but is caused by a change in the structure of the pigment. Eumelanin is present on other body parts of the dog such as the nose and eyes. 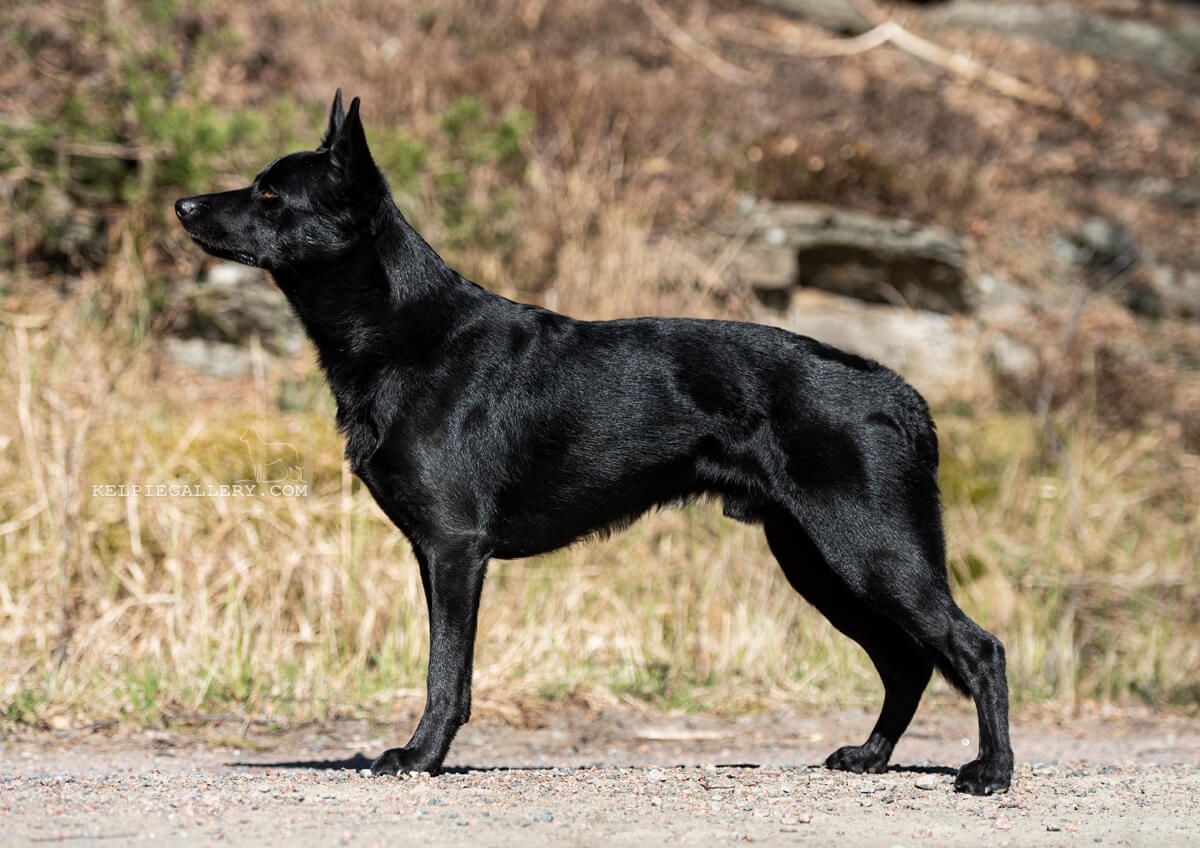 Black kelpie male with only eumelanin. 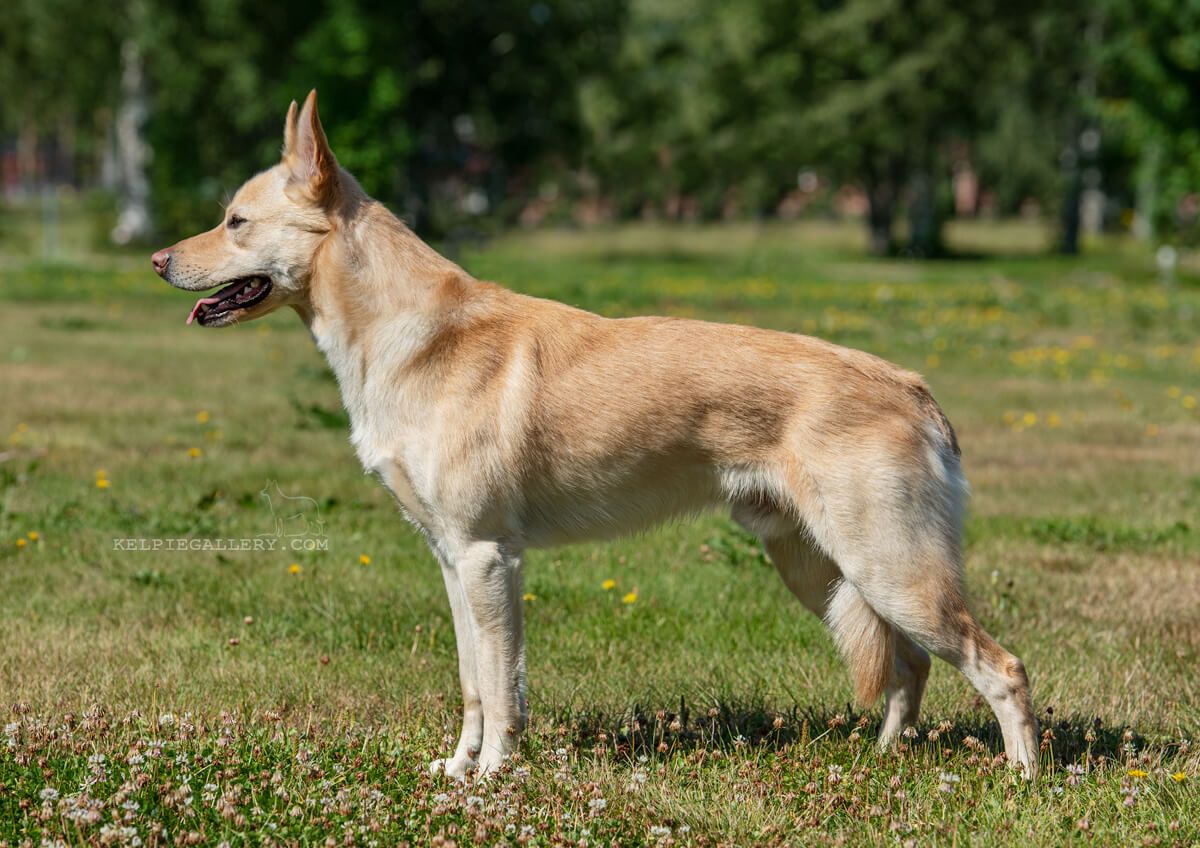 Cream kelpie male with pheomelanin in the coat.

The other type of pigment is pheomelanin which is the red pigment. Pheomelanin is only produced in the fur and does not occur in the eyes or on the nose. In contrast to eumelanin it does not come in two colours. Pheomelanin is just one colour which varies in intensity. There are variations from a dark red in dogs as the Irish Setter to pale yellow as in a very light-coloured Labrador. Most dogs, however, have both eumelanin and pheomelanin. A black and tan Kelpie is a wonderful example of this. 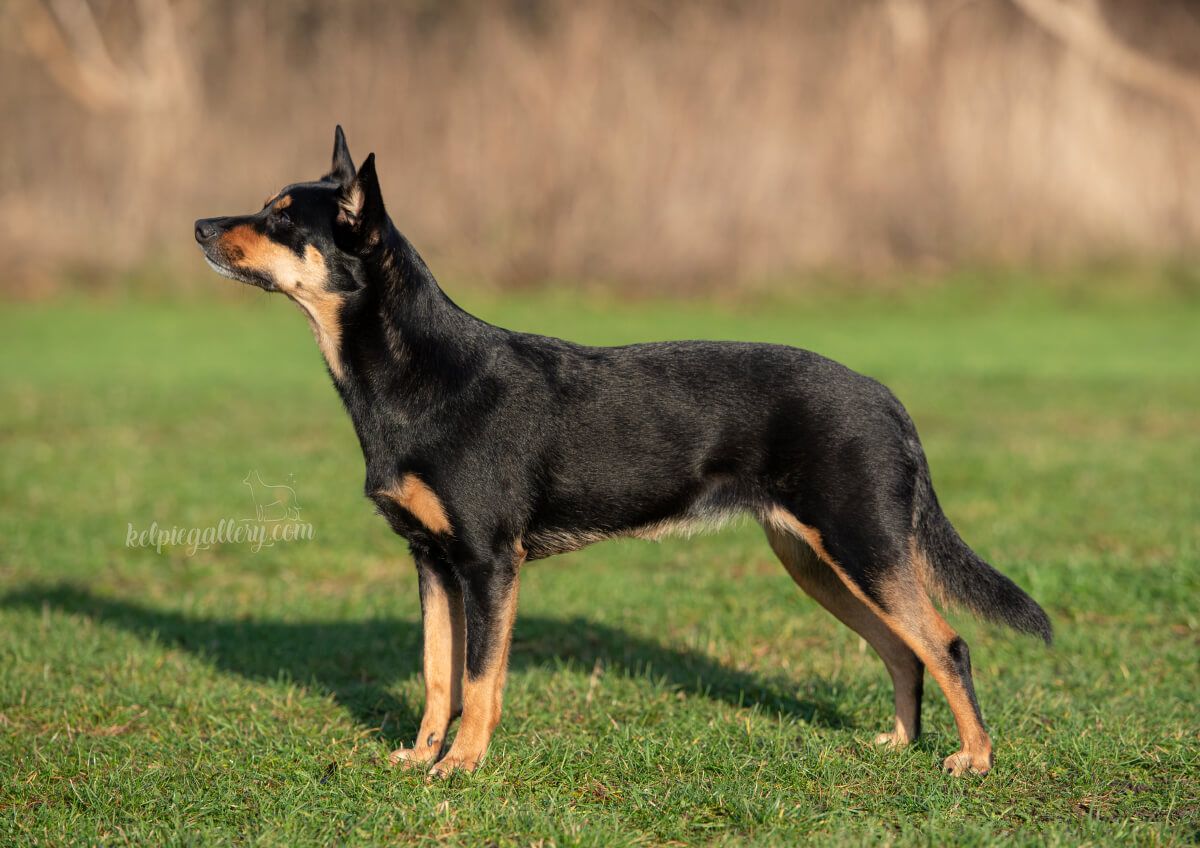 Evallens Tan Under The Stars

Black and tan kelpie female with both eumelanin and pheomelanin.

Black and tan kelpie female with both eumelanin and pheomelanin.

The melanin pigment is produced in the melanocyte cells. These are pigment cells located in the neural crest found already in the embryotic stage. The pigment cells migrate to the skin, either covering parts of the body or the entire body, and these cells has a lifelong production of the pigment melanin. Pigment cells and nerve cells have the same origin. This means that genes controlling pigment cells also control neurological and immunological functions. Hence the connection between specific colours and illnesses in some dog breeds.
The white colour is not a colour
White is not really a colour but a lack of pigment which shows up as a white coat. In dogs it reflects a deficit in both eumelanin and pheomelanin. When the cells cannot produce any pigment at all the result are white areas. This can also affect the production of eumelanin in the eyes and the nose, causing a pink nose and blue eyes.

There is another type of white which is caused by a dilution of the pheomelanin. The cells produce less pigment than normal creating a pale colour. Dogs with this type may have a creamy or ebony coloured coat. Normally this type does not affect the eumelanin so these dogs may have areas with black, brown, blue or Isabella coloured coat, while eyes and nose remain dark.
Under continual development

Genetic research is continuously developing, and old truths are being revised all the time. In the near future we hope to clarify how the gene for the brown colour’s intensity works, or find out the exact reason why some Kelpies are “ghost tan”.

The texts about colour genetics on the Kelpiegallery pages are based on scientific research. Do note that the genetics information on these pages are written in a simplified language and addresses general home page visitors. If you are interested in delving deeper into colour genetics, I recommend looking at the list of sources.