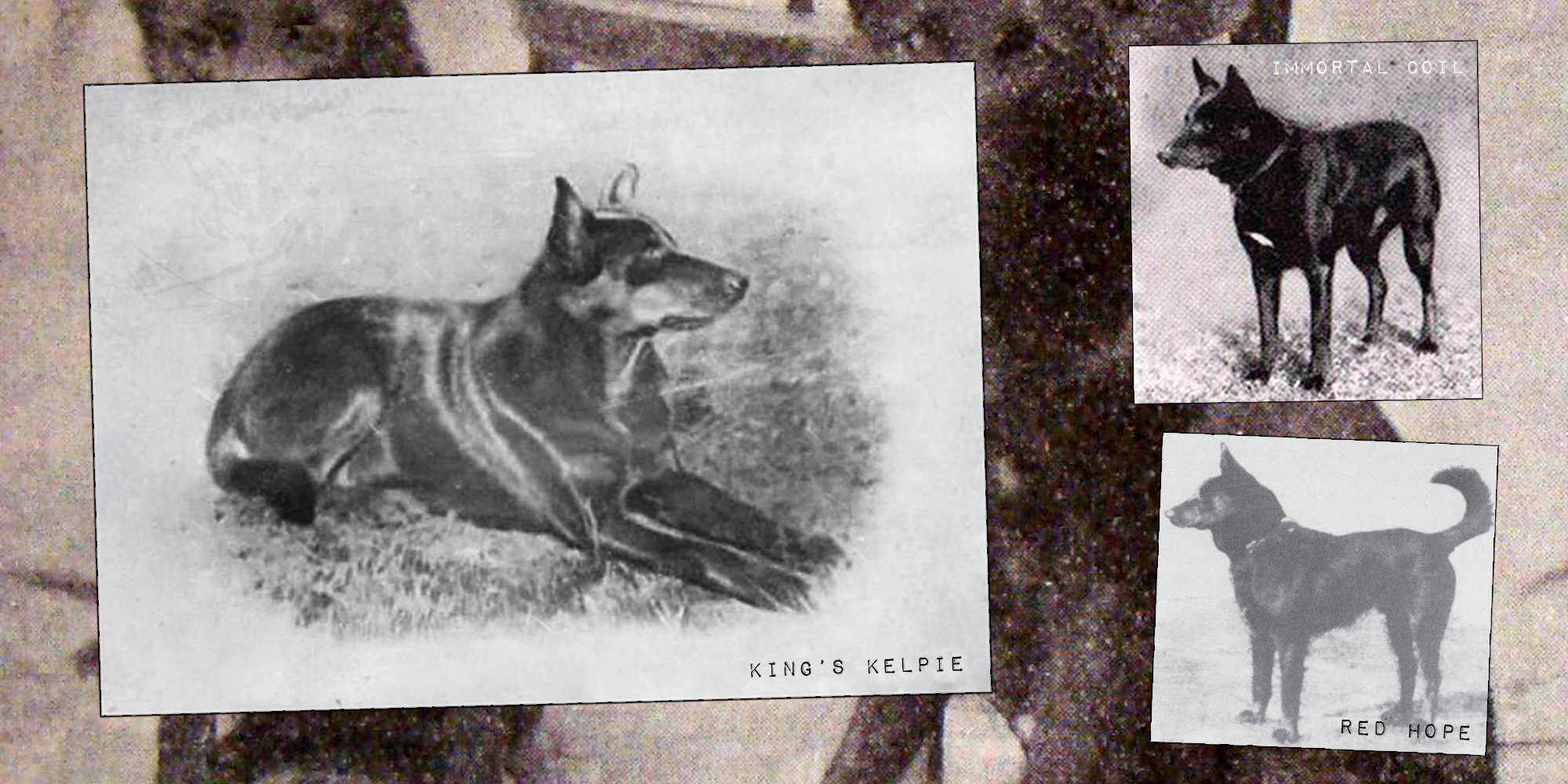 The origin of kelpie
The colonisation of Australia began in the 1790’s as the continent was explored, and cities were constructed and established. Around the same time shepherding became prosperous on the Australian plains which brought many emigrating Brits. These British sheep farmers saw the need for sheep dogs when the sheep industry increased. Around the turn of the century the Brits imported dogs from their families in the old country. The first imported dogs were a heterogeneous group of sheep dogs since the sheep dog lineages in Scotland at the time varied between different districts. The dogs were all called Scotch Dog Collies regardless of their appearance. Over time, some lineages had a greater influence. This marks the beginning of the Kelpie’s history.

The Kelpie’s origin can be traced to three sets of parents that were imported by three immigrants, with no connection of each other. The bitch that came to name the breed was born on the property of George Robertson, Warrack Station in Victoria. This dog was the offspring of two black and tan Working Collies, both imported from Scotland in 1866. This puppy had a long, black and tan coat and floppy ears. She came to Jack Gleeson and he named her Kelpie, a popular name in Scotland for herding bitches at the time. Kelpie is Gaelic and means water spirit, a mystical spirit. The Gleeson Kelpie was also called Old Kelpie.

In the beginning of 1870, when Gleeson’s Kelpie was born, he visited his old friend Mark Tully who gave him a black dog named Moss. This male dog was brought up by Mr. Rutherford on the Yarrowonga Station. Moss was the offspring of two black and tan coloured dogs imported from Scotland. Gleeson’s Kelpie was mated with Moss and this resulted in an outstanding lineage of sheep dogs.

The third original set of parents, Brutus and Jenny, were both black and tan coloured Working Collies imported from Scotland around 1870. Brutus and Jenny had, among other pups, Caesar, Nero and Laddie. This offspring became excellent sheep dogs, well suited for the Australian conditions. Caesar mated Gleeson’s Kelpie and a Mr. King was given a black and tan bitch pup from this parent combination. This little bitch was named Kelpie after its dam, and she developed into an outstanding sheep dog. King ran her in the first sheep dog trial in Australia in 1872. King’s Kelpie won the trial and because her impressive performance the demand for her puppies was huge. These puppies were called Kelpie’s pups – and the rest is history as far as the breed’s name is concerned.
Myths
The origin of the breed has been up for discussion over the years and several myths are floating around concerning parts of the origin. One myth concerns the origin of the red colour. From the very beginning there was at least one red puppy in each litter. This fed into the belief that the Australian wild dog, the Dingo, was part of the breed’s origin. According to The Australian Kelpie Handbook by Norm McLeod (1985), there is no valid evidence for this, since red puppies had been born earlier, from the parent set Brutus and Jenny already in their native country. In addition, breeders established that the further they came from a (possible) Dingo origin, the better sheep dogs were bred. Another myth about the red colour is that a sheep dog mated a fox. This combination could only have produce sterile pups as the dog and the fox have different number of chromosomes.

Gleeson’s Kelpie mated several times with both Caesar and Moss. The offspring mated among them. Salle and Laddie (same litter as Caesar) were also mated with Moss and produced Barn, a solid black dog. Barb’s offspring and other black Kelpies were held to be a separate breed, but towards the end of WWII, Barbs and Kelpies were regarded the same breed.
The first famous kelpies

From one of the matings between King’s Kelpie and Moss a lineage developed which produced one of the most renown dogs within the breed, a blue dog named Coil. Jack Quinn ran Coil in a sheep dog trial in Sydney 1898, which he won with a maximum score of 200, with a broken leg! Coil had in his first heat in the sheep dog trial scored maximum points and so qualified for the finals. That same evening, he had an accident and broke his foreleg. Despite the broken leg, Coil was allowed to start, and he completed the entire trial show with the highest score and won! He was hereafter called The Immortal Coil.

Jack Quinn meant a great deal to the breed’s development through his successful breeding programme. He made the breed popular both for sheep dog trials and for dogs needed for work on the stations. Quinn kept strictly to the original lineages, while the breeders King & McCleod brought additional imported dogs into their breeding, which has caused quite a bit of criticism from others.

Another famous Kelpie is Red Hope, a dark red dog originating from King’s breeding. During the 1920’s Red Hope scored in the top, in none the less than 52 sheep dog trials and he won 19 trials. He was so successful that every breeder used him to mate their bitches. Almost all of today’s Show Kelpies originate from Red Hope.

During this period breeders were active both in sheep dog trials and in conformation shows, and the conformation shows became more and more popular. More breeders, especially in the cities, geared their breeding towards exterior beauty, while other breeders wanted dogs both successful in conformation shows and as excellent working dogs. Two types of Kelpies were differentiated for either their appearance or their working abilities.

The breeders of either type failed to appreciate the other’s breeding, and so one group of breeders formed The Working Kelpie Council (WKC) in 1965, with the aim to preserve and maintain the original lineages’ herding qualities. The organisation kept their own stud book and published the first set of the National Stud Book in 1967. It was disputed by the breeders of the other type of Kelpie, which by then was called the Show Kelpie. The breed was completely separated a couple of years later, with each type holding their own register, WCK for the Working Kelpie and ANKC for the Show Kelpie, which is today’s Australian Kelpie.

Today the Working Kelpie and the Australian Kelpie are two separate types and they hold their own register or stud book. They have a common origin and history despite being named as two breeds or as one breed with two different lineages.
Sources
Page updated: 2020-01-02